skip to main | skip to sidebar

This hummingbird was at the feeder but when I stepped out on the deck it flew over to the choke cherry tree and waited for me to go back in.
Posted by John Theberge at 8:08 AM 17 comments:

Here are a couple of lupine shots, one standard and one a little more abstract.
Posted by John Theberge at 8:05 AM 9 comments:

I photographed lupines last week but that's not the only thing I took pictures of in the area. The bird life was crazy so I'm glad I brought my long lens with me. These are the first cedar waxwings I've ever photographed and they let me get pretty close, there was a whole flock.
Posted by John Theberge at 8:28 AM 12 comments:

Here's a left over picture from back in May when I went to Sabattus River. It landed on the pine for a split second and I was only able to snap one photo.
Posted by John Theberge at 6:59 AM 11 comments:

I took this photo shortly after the sunrise photo from the last post. The ragged robins were in peak bloom. Like I mentioned before, I was actually headed to photograph lupines so I wasn't really dressed for trudging through a dew laden field. I had about a quarter mile walk from the road to get to the spot where I photographed the sunrise, needless to say I got soaked. I usually wear waders when I go out at dawn. By the way I did make it to the lupine patch this past Saturday morning so I'll be posting photos from that day soon.
Posted by John Theberge at 7:24 AM 9 comments:

I took this photo last Sunday morning. I was originally headed to photograph a field of lupines and I wanted to be there at sunrise which on that particular morning was at 5 AM. It's a half hour drive to the lupine field so I left the house at 4:30 but I never made it. When I started to see the colors forming in the sky I decided to head to Sabattus River. This was the distraction I mentioned in my last post.
Posted by John Theberge at 9:21 AM 21 comments:

I got up early yesterday to photograph lupines but I got side tracked by something else, this is one of the photos I took. Later in the week I'll post what distracted me.
Posted by John Theberge at 7:29 AM 17 comments: 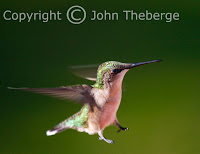 I have at least four hummingbirds visiting the feeder. I've seen two males visiting and feeding at the same time but the two females I saw at the same time were battling. Maybe I have more visiting but they're so quick it's hard to tell any differences.
I've had some questions on how I took these photos so I'll share that info. I use my Canon 100-400mm IS zoom lens. With the multiplyer factor of my 40D, the lens zoomed all the way is the equivalent of 640mm. I also have my 550 EX flash on the camera. The first photo of the female in flight I had the camera set at the normal synch speed of 1/200th of a second, that's why the wings were blurry. The flash was set at -1 2/3 stops underexposure so the flash light wouldn't overpower the natural light. There was no flash used on the male sitting at the feeder. On today's photo I had the flash set on the high speed synch mode so I was able to set the shutter speed at a lot faster 1/1000th of a second, which helped freeze the wings a little more. The pic is a tad over exposed but it was my first attempt at high speed so I'll be out there practicing more as the summer progresses.
I have the feeder set on my deck rail which is about 30" high, I'm standing about ten feet away with the camera looking down. The soft green background is my out of focus lawn, I shoot wide open at f5.6 so that helps with keeping the background soft.
Posted by John Theberge at 7:18 AM 12 comments:

My book is hot off the presses at Blurb! Take a sneak peek and place your order if you're so inclined by clicking on the cover photo above. An eBook version for download to your iPad or iPhone is now available in the iTunes store.

John Theberge
I live in Lewiston, Maine and have for most of my life. I've always had an interest in nature; as a kid I read books by Edwin Way Teal, Rachael Carson, among others, and I used to love studying the Golden Nature Guides. When I got into photography it was natural for me to take pictures of the natural world. A few years ago I got into kayaking and that allowed me to get to places I would never be able to by hiking and of course this gives me more photography oppurtunities. I realized years ago you don't have to travel to exotic locations to get good photographs. I have to admit I'm lucky to be living in a beautiful state with a lot of natural diversity, but I've taken good pictures right in my own back yard and neighborhood.